Meet Lisa Hymas. She’s the senior editor at Grist, the online environmental salon, and a self-proclaimed GINK: green inclinations, no kids. Hymas makes a strong case for child-free living, including reducing the impact of over-population on the environment. But even though her manifesto is environmentally-driven, she makes a strong statement about how we childless and child-free women often side-step the conversation about kids. Hymas says:

Parents talk all the time about the delights and challenges of raising kids, to other parents and to all the rest of us, and I don’t begrudge them that. We childfree people rarely discuss in public the upsides and downsides of life without kids—and that’s what needs to change.

I couldn’t agree more. For too long, being childless has been something that shouldn’t be discussed, something we should be embarrassed about, or something that isn’t a topic for polite conversation. We’re sending a message to young women that living child-free isn’t an acceptable option. And we all know that it is.

You can read Lisa Hymas’ GINK manifesto here. Tell us what you think.

Filed under: Uncategorized — Life Without Baby @ 12:01 am
Tags: Childfree by Choice, Childless by Choice Project, Society 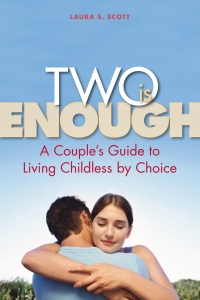 Laura S. Scott is the founder of the Childless by Choice Project and wrote this book based on her findings.

Two Is Enough: A Couple’s Guide to Living Childless by Choice is the narrative of one woman’s quest to explore the motives and decision-making processes of the childless by choice in North America. Facing the end of her childbearing years in a childless by choice marriage, author Laura S. Scott surveyed 171 voluntarily childless individuals in United States and Canada to determine why and how they came to the decision to remain childfree.

It makes for interesting reading. She says:

I think we need to acknowledge that in a pronatalist society, child-free can sometimes be a loaded term. It can imply more than we intend, inviting people to assume motives—like dislike of children—which may not apply to some who are using the term as a way to communicate their well-being. Child-free also implies a type of lifestyle that may not be an accurate description of the lives of some of the childless by choice persons I have interviewed: teachers, childcare workers, and those who choose to welcome other people’s kids into their lives.

Have you read this book? Can you recommend other books for childless or child-free readers? Let us know.

With Easter and Passover upon us, it’s a time of year for gathering with family and keeping up traditions. Maybe your traditions include a huge family dinner, a sunrise service, or a mad hunt for chocolate-filled plastic eggs. But when you don’t have children, many traditions are either impossible to maintain, or simply aren’t the same. Not that there’s anything wrong with decorating eggs for your own pleasure, or mounting a one-person egg hunt, but having your photo taken on the Easter bunny’s lap could present all manner of problems.

My family didn’t attend church and so our Easter day was almost always spent hiking in the nearby countryside. That’s a tradition I’m more than happy to keep up. If I had children, I would decorate hard-boiled eggs and make bunnies out of pom-poms. An Easter egg hunt would be a tradition I’d adopt for my children, too. But I don’t have children and so I won’t be doing those things.

Many holiday traditions revolve around activities for children, so those of us without children have to start our own traditions. Today I’ll cook lamb with fresh spring vegetables, such as fava beans, English peas, and baby potatoes. I’ll uphold my family tradition of getting outdoors by taking a walk or a bike ride with my husband. I might even go to the sunrise service at the beach.

After my gripe on this week’s Whiny Wednesday, I came across this post on the excellent Childless By Choice Project blog. It chronicled the backlash of criticism after Slate’s Dear Prudence suggested to a newly married couple that they rethink their decision to not have chidren rather than suggesting how to deal with the people who keep hounding them about their choice.

When I recently told my OB/GYN that we had decided not to pursue fertility treatments and to remain childless instead, she told me that it wasn’t too late for me and that her friend had just had a baby at 45. Do people really not hear us when we tell them about the decisions we’ve agonized over? Do they not give us credit for having weighed the options and made the right decision for us, not them, not the future of the human race?

One reader, who has three children said:

Having said all that, people should (or should not) have children because it’s what they want to do, not because of the expectations of others.

People who choose not to have children have just as much right to that choice and the right not to be harassed by anyone, including parents and grandparents.

Amen! But another reader had this to say:

We are past that age where people are expecting us to have children. However, we still get people who think we will regret our decision, so at any age the decision to remain childfree is challenged or not seen as viable.

If we can’t change people’s point-of-view, or their need to express their opinions on how we choose to live our lives, maybe all we can do is go out into the world armed with an arsenal of snarky comebacks. It’s just a suggestion.

Kudos to Alexandra Paul for taking a stand in her Huffington Post article Married, Without Children (February 17, 2010). It takes a lot of courage to tell people you aren’t going to have children, whether by choice or by circumstance. We live in a society that expects women to reproduce and most people still struggle with the idea that someone would decide not follow the road most traveled.

Anyone without children can only imagine the conversations Ms. Paul had with those people who enquired about her reproductive plans. We all have our own horror stories. What’s the most inappropriate thing someone has said to you when you’ve told them that you don’t have or plan to have children?

Filed under: Polls,Uncategorized — Life Without Baby @ 9:31 am
Tags: Childfree by Choice, Infertility, Poll

“Well, you didn’t exactly choose not to have children, did you?”

While no one has actually said this to me yet, I know it’s just a matter of time. As you’re probably well aware, when it comes to the subject of motherhood, and especially non-motherhood, people are generally vocal about their opinions and not always tactful.

In one respect those people would be right. Having children was always my plan for as long as I can remember, but in my teens I chose not to have children by practicing the safe sex tactics that had been drilled into me by sex education programs, friends’ dire warnings, and starling stories in teen magazines—that and a healthy smattering of blind dumb luck. In my 20s I chose a career over motherhood; there was a great big world and a great big me to explore before I settled down into the role of mother. In my 30s I was ready, but a suitable mate wasn’t available and I didn’t have the means or the guts to do it alone. Finally, in my mid 30s, I met Mr. Fabulous and set out to become a mother. But Mother Nature had other plans for me and I apparently wasn’t meant to have a child easily or naturally. So in that respect, it wasn’t that I didn’t choose motherhood, more that motherhood didn’t choose me. But as I once read in one of the many books about trying to conceive, “there’s no such thing as infertility,” and I think that’s true for the majority of women. With enough medical intervention, sufficient high-powered drugs, enough attempts, and sufficient money to do them all, motherhood is an option for almost every woman.

But here’s where I made my choice. I chose not to pump my body full of drugs; I chose not to hire someone to produce a baby for me; and most of all, I chose not to sacrifice my marriage for the sake of an endless quest for motherhood. I made a choice and I’m living, quite happily, with that decision

What choice did you make? Leave a comment or join in on a forum and let us know what you think?